In the machine and plant construction industry components are exposed to various forces. That is why, the component properties such as material and strength have to be adjusted to the specific needs on the application site. In addition to classical strength calculations of different force effects, temperature tension or dynamic processes can be also investigated by FEM simulation. 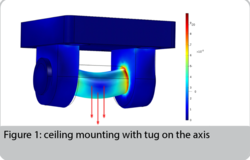 In this application example we study a mounting bracket, which is used in many different fields of application. We have a detailed look at static questions like compression and elongation. The aim was to demonstrate the strength for potential applications.

The study of different loading condition is carried out by means of FEM simulation. With the help of a suitable mesh discretization the component is decomposed into individual elements. Depending on the task different discretizations are required. For the discretization of a three-dimensional area different structures like tetrahedral, cuboid or curved surface were adapted to the problem, which should be solved. The finer the discretization, and thus the density of the network the more accurate are the results of the approximate calculation. However, the mesh computational effort increases when using denser mesh, therefore it is reasonable to develop intelligent discretization solutions.

We have tested the component in several scenarios. Figure 1 corresponds to the case of a ceiling installation with traction on the axis. The force increases on the axle, especially in the areas where it is mount into the bracket. The bracket only has to compensate a minor load at the guide of the axis and counteracted it with a slight deformation. In Figure 2  a stem is placed into the bracket. By rotation of the stem in the bracket friction force is generated. The friction causes a load distribution around the axis and a deformation of the component can be observed. In the case of temperature reduction the stem would contract under certain circumstances due to the material this scenario is shown in Figure 3. This, as expected,  shows a huge deformation of the bracket. The highest load is on the base.